Mark Waid,  The Rocketeer/The Spirit: Pulp Friction. San Diego, CA: IDW, 2014. (Link to publisher previous press release on the series as this volume is not out as of this post. It is due out on March 25, 2014). 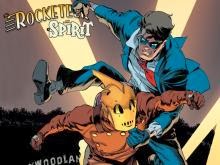 I was not terribly impressed with this volume that brings together two popular pulp heroes. This volume compiles issues 1-4 of the comic series of the same title. If you know them from their films, you owe it to yourself to seek them out in comics form. However, this is not really the comic to do that.

The premise of the comic is a good. It is the era of the advent of television, and the big corporations are trying their best to take over the public airwaves to make them into their own private advertising venues. In a way, this rings relevant to today's debates on net neutrality. Sadly, this is as far as the volume goes in terms of some substance. Now I understand this is just light reading and adventure fluff. I would have been fine with that, but this comic just has one issue too many. First, the attempts at slapstick humor fall pretty flat. Next, the pairing of the two is forced to the point of being not just awkward but actually painful. The Rocketeer comes across as the bumbling guy that The Spirit has to put up with in order to solve the case of the dead politician from Central City. The investigation takes him to California where he meets The Rocketeer, and it goes from there. We then get some Nazis and some evil corporate overlords for bad guys, and that is OK, but that is about it. If nothing else, this volume is a quick read. This is one definitely to borrow rather than buy. Compared to other works by Mark Waid, this is definitely very lightweight.


The disclosure note here is where I tell you that I received this e-galley from the publisher via NetGalley. I tell you this and the fact I was not compensated for giving an honest review so we can keep The Man happy.
Posted by A. Rivera at 4:28 PM