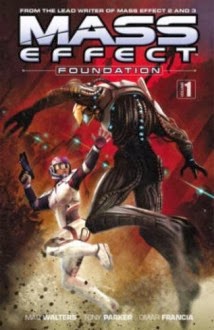 This is based on the video game, and I have to say that if you have not played the game in order to know the characters, you could be a bit lost here. If you are like me, who has not played the game, this series compilation barely gives you enough to figure out what is going on.  Thus, since the story may be a bit complex for some readers, I am including the book description:

"Brilliant, ruthless, and secretive, the Illusive Man holds the galaxy within his grasp, yet with all his vaunted resources, one objective eludes him-- an elite soldier, an  unstoppable Spectre, and an inspirational symbol: Commander Shepard. Enter Agent Rasa, the Illusive man's most resourceful and cunning operative. Targeting Urdnot Wrex, Ashley Williams, and Kaidan Alenko, she will use the crew of the SSV Normandy to further her mission-- bending the commander to her master's will" (from the book's back cover).

The comic is not as good as it sounds in the description. We get an initial scene that gives us the origin story of Agent Rasa, showing her ruthlessness early on. After that, years later, Rasa is sent on a mission to get some information and bring in a man. However, she is not the only one after the target; another bounty hunter is out for him as well, and Rasa needs the target alive. This is where not knowing all the backstory can make a difference for some readers. You see things happening, but you are not sure why they are happening. In spite of that, this is a pretty good espionage and adventure scifi tale. It does have a good pace; it does draw you in. I may seek out more in the series.

Disclosure: The mandatory stuff I have to type to tell you that I read this as an e-book review copy via NetGalley in exchange for a fair review. You know, so The Man is satisfied everything is kosher.
Posted by A. Rivera at 12:26 PM