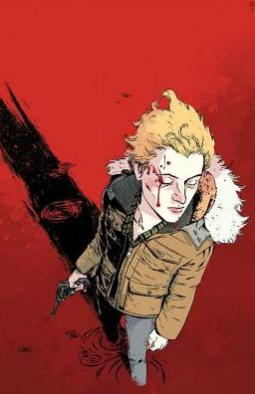 This series is brought to you by Image Comics, the folks who also publish The Walking Dead. This volume compiles the first five issues of the series. This is the start of the series, if you like post-apocalyptic fiction, you might like the author's twist on the concept. However, it feels a bit too much like a Lord of the Flies for this generation. The premise is as follows: a group of prepper/survivalists are all gathered in their compound to await the apocalypse/collapse of society. They fail to realize that the worst danger they face is not some impending disaster or a government coming to oppress them. It's their own children who proceed to kill all of the adults on the orders of one teen who believes the end is near (and without the adults, there are less mouths to feed). From that point onward, the comic strives to be a psychological thriller. It does blend some action and drama as one of the children, not wanting to go along with the plan, is trying to escape the compound and get some help. As the foretold apocalypse fails to arrive on time, the rest of the children in the camp start getting restless, and they are all well-armed.

As I mentioned, this reads way too much like Lord of the Flies, so depending on whether you read that novel and what memories you may have of it, especially if you were forced to read it in school, it may color how you like or not Sheltered. I personally did not like that novel, and so seeing that scenario play out here was not great for me. Yet the author does add some twists and shocking elements, just enough to keep me reading. The opening scenes to set up the rest of the story are well made. Afterwards, it does become predictable as the teen leader pretty much becomes yet another paranoid cult leader.

Will I read on in the series? It's a maybe at this point. I'd be willing to give it a chance at least for a few issues more. I do get the challenge: coming up with something new in the post apocalyptic genre, a genre that has had a good number of entries, good and bad, in recent years. For me, after the initial shock of the children killing the parents, it just seems like a trip back to the island.

I liked it, and I wanted to really like it, but I did not quite get there. It was good, and a nice twist on the genre by making it "pre-apocalyptic," but it just reminds me too much of that other novel. Your mileage may vary. I do think fans of The Walking Dead might like this, although if this series starts emphasizing more drama (read "soap opera") like The Walking Dead has done in big parts of the series, it could be an issue for some readers. Where Sheltered goes, we'll have to see. If you liked The Lord of the Flies, as I mentioned, you may like this one as well, but if you hated it, you may like this less. Fans of the genre who have read other works in the genre may want to take a chance.

Disclosure note: Once again, I get to tell you that I read this as an e-book copy provided by the publisher via NetGalley for an honest review. There has been no compensation. There, we have appeased The Man.