Booknote: The Illustrated Guide to Tarot

Note: book is included in a package set, "The Tarot Box." 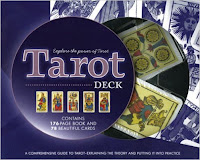 I received a deck of Marseilles Tarot cards as a holiday present; I collect playing cards and some other card decks, mainly for the art. In addition, this past year, I attended an event at the public library where a local Tarot card adviser/reader gave a presentation. If you are interested in the rest of that story, you can read more in my commonplace blog. Otherwise, just note that the cards came with a book, and I am reviewing the book in this post.

The book is a basic guide to the card meanings and how to read the cards, including some basic card spreads. The book is arranged into four chapters:


Though the book came with a Marseilles deck, it also uses Rider Waite card illustrations.  While Rider Waite is a popular deck, often used as inspiration for other more modern decks, it seems the book after a while favors the Rider Waite illustrations a bit more for the latter part of the book, which makes me wonder if that is a reflection of the author's preference or bias. Or it could be due to the fact that the Minor Arcana in a Rider Waite is better illustrated with more symbols and details compared to the basic suit depictions of a Marseilles deck.

In addition, the book features various illustrations in color of other historical Tarot cards and decks as well as other historical symbols and images, such as classical paintings. These add some historical context and show the rich tradition of the cards.

For a small book, it packs a lot. While it is far from definitive, the book provides a good, basic start for people who wish to learn how to read the Tarot for personal  meditation and focus. Depending on where your studies take you, you may wish to explore other books to expand your knowledge such as books on Tarot or other areas like astrology and even numerology.

In the end, it is a utilitarian book. Though I liked it, I know that I will be supplementing it with others down the road. Still, the book is an easy read that is accessible and easy to use, so I will likely keep consulting it as needed.

A brief note on the cards: they are about 5 inches tall by 2 3/4 inches wide on a standard card stock. As mentioned, the Minor Arcana card are suit cards, very much like modern playing cards. In fact, they remind me of Spanish playing cards (naipes). In fact, it is clear this art style crossed various card decks in Europe over time.


This book qualifies for the following 2016 Reading Challenges: