Double Booknote: Having Coffee with Jesus

I found the title of the first volume to be intriguing, which is why I picked it up when I saw my public library has this title. I noticed they had the second volume as well, so I put that one on hold while I read the first one. This series is basically a Christian treatise comic trying to make Jesus look hip. The premise is Jesus, who is dressed in a suit and tie and looks like a marketing executive, meets for coffee with a few of his followers. These followers seem to be mostly conservative evangelical types, the kind of judgmental people the rest of us in polite company do our best to avoid. The idea is they come to Jesus with concerns, issues, questions, etc., and Jesus offers some advice.

The comic started on the author's blog, and apparently did well enough to get put into a book. According to the introduction in the first volume, the character images are "old advertising clip art for the main characters and Sunday clip art for the person of Jesus" (13). That may partially explain why Jesus seems to look like the "Republican Jesus" stereotype. The idea then was for Jesus to refute the characters' "claims of how he might vote on any particular issue, to convince them that they cannot confuse their flag with their God-- to set them straight as it were" (13). This has very mixed results in the comic.

Jesus in the comic combines some serious sass with some serious authority. Jesus has some humorous moments, but he can still be just as judgmental and authoritarian at times as he has always been. If you were expecting a liberal, hippie Jesus, he ain't here. The comic does have a Biblical grounding, so it has enough for Christians, but it still shows a slight conservative bias. It can be controversial for some readers I suppose, but it should not be if you've read your Bible and actually paid attention. There are a few zingers and humorous moments, but you also get the preaching and occasional Christian heavy handedness. Let me highlight some examples from the first volume:

As I said, the books has some humorous moments. As a heathen, I do find amusing it takes this kind of effort to try to get Christians to be less assholes in society: to be less judgmental, less pushy, less self-righteous. But hey, if a bit of sassy and slightly sarcastic Jesus does the job, why not? As a heathen who has read "the Good Book," I did appreciate the humor and even got a laugh or two, so the books are not all bad.

For the second compilation, the content is about the same as the first volume; however, the author did

some improvements. He did not include the lyrics he had in the first volume, which to be honest, after the first set I just skipped them. He also chose not to include any essays written between the strips. As the author admits, the essays were preachy. The comic is already preachy enough without the author laying out more preachy stuff. Yes, I know this is a religious comic, but there is such a thing as laying it too thick.

In terms of structure then, for the second volume, we get the comics after the introduction. Unlike the first volume, the comics are not divided into thematic sections.  You can just read right through the volume. This may actually be an improvement. In fact, it may be the only improvement. The comic remains the same otherwise, including the judgmental attitude at times and the heavy handedness. For instance, in the comic at this point, one of the characters becomes an agnostic, and though Jesus tries to remain gentle with him, it's made clear Jesus does not really like defectors or people who ask too many questions. That uptight insecurity is just part of their faith.

As I mentioned before, there are some small moments of self-awareness in the comic. Not many though because the author remains pretty orthodox in his theology, but they are there. For example, Carl asks Jesus why atheists hate Jesus. Jesus replies that what they hate is the atrocities done in his name, and no, not just the Crusades and the Inquisition but also Holy Land Experience in Orlando. To this we could add Ark Encounter in Kentucky and judgmental hypocrites like Kim Davis. And though Jesus prefers the parable of the prodigal son, Satan in the comic does have a point: Christianity does "coerce and cajole using fear and the threat of condemnation to subjugate. . . " (51). All you have to do is read the Bible and listen to a good number of their preachers.

Overall, the issue with the books is that they try to sugarcoat an orthodox doctrine that is fairly rigid, strict, and it's their way of the highway to hell (and no, I do not mean the AC/DC song). The result is a cutesy comic with a bit of light humor at times where the orthodoxy still slips out, and when you do see it, it's not nice. Christians with a sense of humor will likely appreciate this series. Others might appreciate some of the insights, but if they left Christianity or religion in general, this comic is not exactly an endorsement to get them to reconsider. As a heathen, I read it. I thought it was OK, amusing at times, but nothing new here. In fact, the second volume lays out the preachy tone a bit more thickly at times. In the end, an OK read.

For the first one, in the end I liked it with reservations, so I am splitting the difference in rating it.

Second volume was not much better.

These books qualify for the following 2016 Reading Challenges: 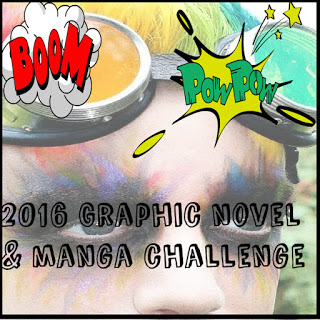