Note: Published by Lo Scarabeo (link), but distributed in the U.S. by Llewellyn (link)

This is the Tarot deck I have been using for the last two Halloween seasons, so I figure this is as good a time as any to write a review for it. 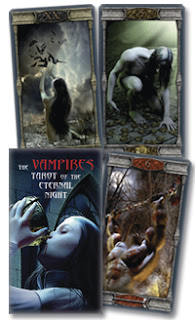 The deck comes in a tuck box that includes the 78 cards and a little white book (LWB). It is published by Lo Scarabeo (distributed in the United States by Llewellyn Worldwide), so the LWB as is common for Lo Scarabeo decks is written in five languages (English, Italian, Spanish, French, and German). The actual content in the LWB is 12 small pages. This content includes a description of the deck and artist statement, a brief overview of the vampire myth, and the meanings for the Major Arcana and Minor Arcana cards. The booklet ends with a spread to try out: The Cross. Card meanings are basic; you get a keyword for each card and then two or three sentences to explain the meaning.

Overall, the meanings are close to Rider Waite Smith (RWS). The booklet states that the deck was created "in total respect to traditional meanings" (3). The deck does stay close to tradition (meaning RWS), but there are some differences in meanings and card depictions. These differences are noticeable, but they do not detract from being able to read the cards on this deck. I'd say at times the differences can make things interesting and/or give you a different appreciation of a specific card, a different way of looking at the card.

The cards are fully illustrated in the Major and Minor Arcanas. The art is computer generated, yet it captures a Gothic horror world of night with a touch of romance. It may be a world of night, but it can still be pretty colorful. In terms of characters, we see vampires male and female, young and old, in human and more vampiric form take center stage. In addition, there are some werewolves, wolves, bats, and a few humans treading this dark world.

The cards do have borders, which is not an issue for me. The images are framed in a grey frame. The Minor Arcana cards have an Arabic numeral and symbol of the suit on top and bottom of the image respectively; court cards have a symbol on top to identify knave (page), knight, queen, and king. The Minor Arcana Cards also have a color code on top and bottom of the card: wands are red, pentacles are green, chalices (cups) are blue, and swords are yellow. The Major Arcana cards are identified by Roman numeral and grey color code; they do not have names on the cards.

As I have mentioned, this is a deck I have been using on Halloween season. For me, it reads well, and it even tricks me a bit once in a while. I had someone suggest to me once this deck can be useful for business and similar type of questions. I have to agree. The vampires' cold nature lends itself to looking at things in terms of just numbers, figures, and transactions. Cards like The Emperor, King of Pentacles, King of Wands, Queen of Swords, and Death are examples that speak to work and business in this deck. I think if you need a little workplace guidance, this deck may work well for you. It h as a bit of a Machiavellian element to it.

Overall, I really like this deck. It captures the Gothic vampire scene well with good art and range of expression. As I noted, some meanings and images veer away from strict traditional RWS, so it may not be a good deck for beginners trying to learn traditional RWS. However, if you have a little experience, you will likely appreciate the differences and make new connections in reading the cards. Personally, comparing where this deck differs with the more traditional meanings is an interesting exercise for me; often I find meanings are not that far apart, or this deck just gives me a new way to look at a card.

Tarot readers and collectors who like Gothic horror and vampires will likely enjoy this deck. This is one I plan to keep using and enjoying for years to come.

On a final side note, I understand there was a previous edition which included a companion book (same cards). That book is long out of print, and these days you can only pretty much find the deck.

Below are some of my favorite cards from the deck, with a bit of commentary. These are photos I took personally of my deck: