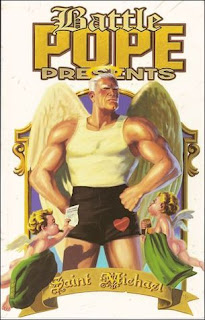 This is a prequel to the Battle Pope series, which I have reviewed in this blog. I will put the links to those reviews below. In the prequel, God finally decides to carry out the Rapture. However, the Rapture does not quite turn out the way He expects, so He just pouts and forgets about humanity. After a while, God feels sorry and sends Saint Michael the archangel, who knows nothing of humans, down to Earth to protect them. Naturally all sorts of misunderstandings happen.

The comic has amusing moment, but it is just not as good as the Battle Pope series. It does feel more like an add on than an essential part of the overall story. I did like the idea of portraying Michael as a tough as nails general with uniform and all. However, otherwise, the comic is not that big a deal. It is a short and quick read, so there's that. I like it, but it was just not on the same level as the main series. I'd say it's optional reading.

If interested, here are the reviews of the main series volumes: